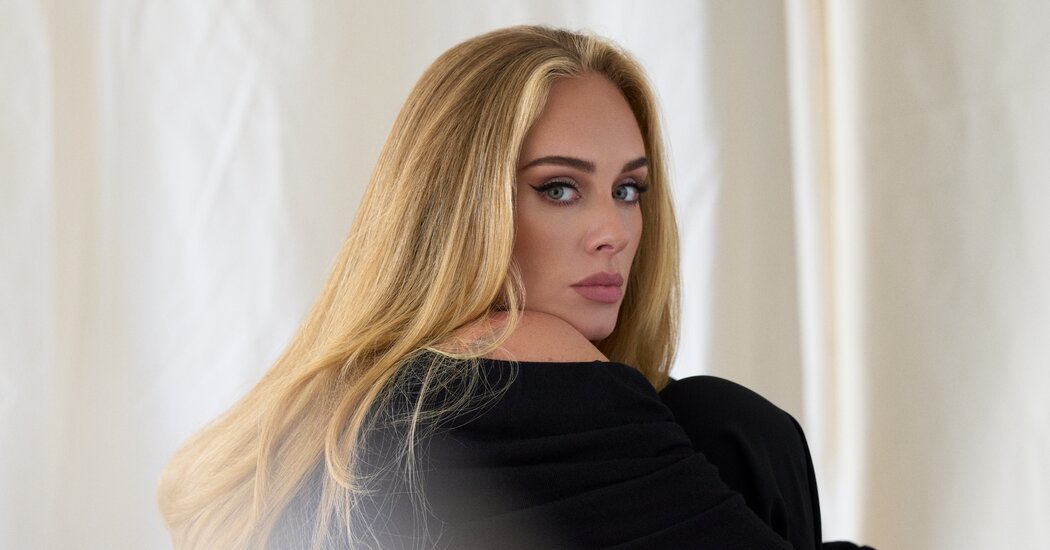 Six years have passed since Adele released “25,” her diamond-certified third studio album. In that time, just about everything in the music business has changed: Streaming is firmly the default distribution option, sing-rapping and pop-punk are the most popular stylistic frameworks and TikTok has essentially stripped down songcraft for parts.

But no one’s told Adele, who was a nuclear-class warhead vocalist then, and remains one now, and whose approach to making music hasn’t changed at all. “Easy on Me” is the first single from “30,” her fourth studio album, which will be released next month. It was shaped, she’s said, by the tumult in her personal life. Adele is a singer whose most joyous songs are laden with the same damp melancholy as her most wounded ones.

Her true gift, though, is restraint — knowing just how patiently to dole out her voice, hovering over each syllable as if slowly laying cinder blocks, methodically robbing her targets of air. That’s captured in the song’s opening lines: “There ain’t no gold in this river/That I’ve been washing my hands in forever,” a straightforward record of a baptism that turns to drowning. Abetted by a piano, she continues apace, detailing a relationship to which she gave all, until she didn’t. It is a deft and almost soothing dismissal, made even more tense by the feeling that even at her most pointed, she’s holding a little something back. JON CARAMANICA

For once, Finneas matches the glum, whispery insights of his sister, Billie Eilish, in a song that recognizes where real life falls short of romantic fantasy. It’s from his debut album, “Optimist,” released on Friday. Over plain piano chords, he sings about moments like “That hollow feeling in your chest/as you both wordlessly undress after a fight,” without any easy consolation. JON PARELES

“Down Nuh River” is equal parts down-home and cryptic. It’s rooted in the task-oriented rhythms of work song and playground chant: “Go go go go on swim on down nuh river now/oh you tryna get me in trouble now.” The beat syncopates an octave-hopping bass line against a muffled thump and one-handed piano chords. But it’s not so simple: serpentwithfeet — Josiah Wise — keeps shifting and multiplying his layers of vocals and effects, hinting at hallucinations and revelations if someone will “swim to the deepest part/that’s where all the wishes are.” PARELES

Juls’s beats possess a textured softness, like a satin slip dress. And frankly, that’s probably what you should be wearing when listening to “Intentionally,” a new track from the British-Ghanian producer and Fireboy DML. “Just love me intentionally/I don’t want no temporary,” purrs the Nigerian vocalist. The song, from Juls’s first studio album, is sweet, simple desire, a lilting promise of mutuality and tenderness. ISABELIA HERRERA

“Run Ricky” is the lead single from “Black Wall Street,” the debut album from the young vibraphonist Nikara Warren. The track shows off her skills as an instrumentalist, bandleader and rapper, starting with an insinuating bass line from Parker McAllister and some light boom-bap from David Frazier Jr. on drums. Horns, keyboards, guitar and Warren’s vibraphone fill in around them, and she rattles off a rap about Ricky, a young Black artist felled by violence. “Damn Ricky, you should’ve done the impossible,” she says as the verse closes. But this doesn’t bring the tune to its climax; the group continues for another three minutes, Hailey Niswanger’s tenor saxophone and Stephen Fowler’s trumpet stay melded as the groove shifts, inflected with funk and then rock and then Afro-Cuban clave. GIOVANNI RUSSONELLO

Like a spaghetti western from the ’60s, Dos Santos’s “Alma Cósmica” is a burst of narrative mystery. “¿Adónde voy? ¿De dónde soy?” wonders bandleader Alex Chavez. We may not know where he’s going or where he’s from, but the production keeps us going: a twanging guitar and an insistent shaker curl together, twisting into mutant chicha. HERRERA

Walker Hayes’s country hit “Fancy Like” is an advertisement masquerading as a song that has been now fully repurposed as an advertisement. It is a happenstance smash, and also lightly craven — lightly because Hayes never fully commits to the bit; at times he seems to be singing a parody of advertising jingles. He’s a little wry, but not so much that it derails the pitch. That tenor is deployed, too, on Hayes’s new single, “U Gurl,” a kind of faint caricature of hypermasculine country talk-singing: “So the way you walk is suggestive/strip-mall-town impressive/Girl, I hate to see you go, but I love to watch you exit.” It’s familiar text, delivered with a mildly arched eyebrow. And it’s effective — a “can you believe I’m doing this?” scorcher to follow the “can you believe we got away with that?” smash. CARAMANICA

The cheerfully, even relentlessly wholesome Colombian songwriter Camilo and his wife (as of 2020), Evaluna Montaner, have copiously documented their romance on social media as well as in songs. “Índigo” continues to merge those content streams in a breezy, hand-clapping, yacht-rock duet, all strumming guitars and close harmonies, that exults in amorous bliss — “I won without playing the lottery,” they sing — as the video flaunts a positive pregnancy test and a baby bump. PARELES

Not a note goes to waste in the translucent playing of Edward Simon, a Venezuelan pianist who is now the longest-serving member of the esteemed SFJAZZ Collective. He recorded “Solo Live” in Oakland, during a 2019 concert at the Piedmont Piano Company, on his 50th birthday. On “Country,” the album’s lone original, a rolling melody over a repeated pattern of farseeing chords gives way to a long, looping improvisation that culminates in chunky, rhythmic cross-talk between Simon’s left and right hands. RUSSONELLO